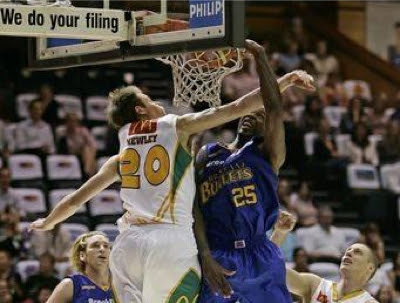 Newley, why did you jump?
Seriously, if Ebi Ere doesn't win the 2008 NBL MVP, the NBL will instantly lose half of its fan base (ie. me - I'm sure there's at least one other NBL fan out there. Right? Guys? Hello?).

Besides, could you see this guy in the Hummer H3 that the MVP will get? Son is already rolling in his Proton sitting on 14" rims! 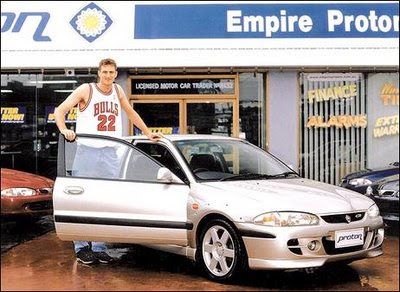 Here's some snippets from an interview I did with Ebi for my website and PBT waaaaay back in 2004 when he was in his first NBL season with the Sydney Kings. He's one of the more interesting dudes in the NBL, quiet but with a lot to say at the same time.

OK...
How many questions are you asking?

This is a potential... [I was trying to tell him it was a potential cover story for PBT, which it turned out to be - DJLS]
Damn, who do you think you are, Andy Katz?

OK, how are you enjoying the season so far?
I'm feeling good. We're number one on what you call the ladder, that's all you can ask for at this stage of the season.

I understand you've been "adopted" by an Australian family.
Yep [laughs]. That's my teammate, CJ, and [his wife] Jessica Bruton. They take care of me, look after me. They help me out, show me around, tell me what I need to do, where to go, where not to go...

What's been the best piece of motherly and fatherly advice they've given you?
Shit, I dunno [laughs]...probably to take care of myself and not to get caught up in the partying and the women.

When you first arrived in Australia you weren't really known as a great three-point shooter, now teams are really crowding you at the three-point line. Is that a part of your game that you've been concentrating on improving?
It's something I've worked on, to become a better three-point shooter. It really was a part of my game that was lacking, and I needed to improve it to get to the next level, because the top next level guards are all great shooters.

Did you feel any pressure when you got signed by the Kings, a team who were coming off their first title, and you're replacing the MVP of the league?
It ain't no pressure. You just go out there and play. It's all about having fun and doing your job, it's not about pressure. There's pressure on everyone on the team, not just me. The pressure is to win a championship. I don't care if your team is 4-15, 20-0, 15-4, the pressure is to win the championship.

When you were first offered the chance to play basketball in Australia, what was the first thought that popped into your head?
When my agent said "Sydney", I thought it would be a nice place to be because most people get caught playing in a small town. I've got a few teammates who are in France. They don't really like it there, they say the people are rude. The people here are all nice. I've got the opportunity to come to a pretty good place.

Who would you put in a NBL dunk comp?
[silence]

Yourself?
I probably wouldn't.

You can't think of three other people to go in it?
Nah.
Posted by DJ LEON SMITH