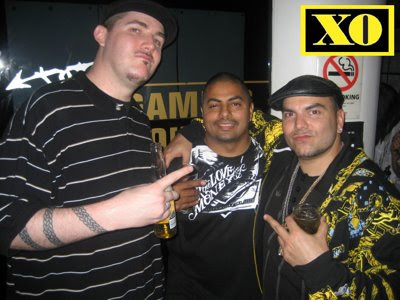 Freak me dead last night was huge at XO. It was bubbling early on, with DJ Carl Alley doing an extended early set instead of the late one he usually does, and by 11pm the dancefloor was getting bizzay. DJ Peril came on and did a cool as hell set, then I got on after that to mop up what was left. Was a massive, massive night, the line down the street was nuts - oh, and before I forget, once again if you don't know me then get the hell out of the DJ booth. Funniest moment of the night - some drunk guy talking semi-reckless to me, before his friend slapped the kufi off his head and told him to shut the f--k up. If you want guestlist for next week, hit up XO's myspace page or email XO here 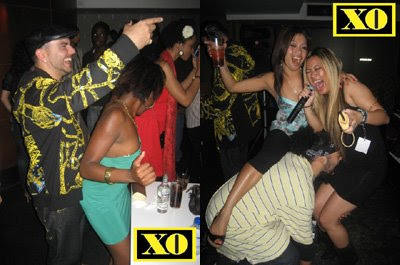 Left: Peril enjoying some of XO's extra-curicular activities after his set. Right: Fuzz, Dot and Kaylani get to know each other better.
Posted by DJ LEON SMITH