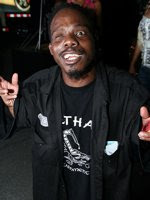 For the past week or so I've been listening to nothing but old Geto Boys albums, so it's with great pride that I present the number one midget rapper in the game and one third of the GBs, Bushwick Bill! Also known as Dr. Wolfgang Vincent Gobin Bushwickin the Barbarian Mother Funky Stay High Dollar Billstir (really). Listen to this track, Ever So Clear, one of the most vivid storytelling tracks in hip-hop history. It's the first-hand account of how Bushwick got drunk, threatened to kill his girlfriend's child unless she helped him commit suicide, then in the ensuing fight had his eye shot out. Naturally, they used a picture of Bushwick in the hospital with his eyeball hanging out on the next Geto Boys album cover.