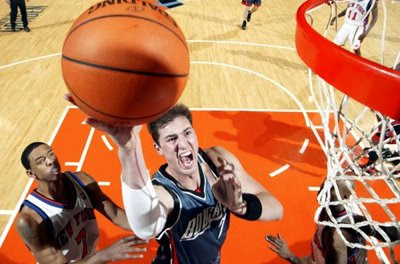 It's not very often that an athlete such as Primoz Brezec enters your life. He is possibly the most unique NBA player - in terms of personality - not named Ron Artest. And Ron-Ron actually had a lot to do with Primoz's birthing. You see, Primoz is a 7'1" Slovenian center who plays for the Toronto Raptors, but he was originally drafted by the Indiana Pacers in 2000. He played for them during their super-gangsta era, when they had guys like Artest and ex-Sydney King Stephen Jackson on the team, and Primoz learnt English by (1) listening to these guys talk and (2) hip-hop. So now he calls his coach "gangsta" and ends all of his lines with "you know what I'm sayin'". Check out these Primoz anecdotes.

In the hallway outside the Toronto locker room, Raptors GM Bryan "Dapper Dan" Colangelo is holding court with me and three of the local writers. As we discuss some of the big trades that went down this season, Primoz Brezec walks by and he is completely drenched in sweat from the pregame warmup.
As Brezec passes our group, he raps (loudly), "She said she wants a hood ni**a!" We all stare at each other for a few seconds trying to decipher what just happened, leading to Colangelo apologizing for the Slovenian's gangsta ways, and everyone doubling over in laughter. - SLAM Online

Primoz Brezec, the newest big man in town, studied English in his native Slovenia before landing in the NBA with Indiana. His classroom was the locker room, and his current speech can best be described as: Euro-boy-in-the-hood.
"I didn't know the slang and all the bad words when I came, you know what I am saying," says Brezec. "But I was pretty good, man, you know what I'm saying?" - National Press

Pistons forward Rasheed Wallace said the only nickname he's come up with for Brezec so far is "gangsta."
Told that Brezec was seen jogging through the streets of Indianapolis during the time when most players are just waking up from their afternoon naps, Wallace said, "See, that's gangsta."
Turns out Brezec just wanted to get to a nearby Starbucks for a hot chocolate before the first bus left for Conseco Fieldhouse. - Detroit Free Press

"Sam's [Raptors coach Sam Mitchell] gangster," Brezec recently told a throng of media gathered around his locker. "As I told you, I just respect the coach and (the fact) they're not scared. They trust in their players and they don't take no (stuff) from nobody. If I do something wrong I don't have any problem with them cussing me out. If I do something wrong tell me straight to my face. That's what he'll do." - HOOPSWORLD

A spy sitting courtside tells me during one timeout the Magaic mascot, a not particularly fearsome looking dragon, was goofing around near the Raptor bench.
Seems Primoz Brezec, for some reason known only to Primoz Brezec, took great umbrage at a stuffed animal having fun and slugged the thing. Then he tells him, 'bleep you, I'll bleep you up.' - Toronto Raptors blog