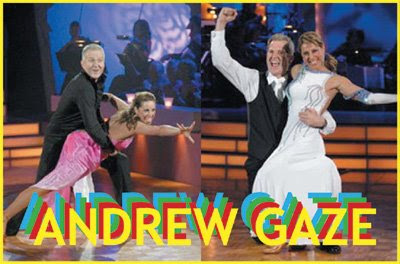 After digging up my Big Boi interview from the archives, here's an interview I did with Australia's number one basketball superstar, Andrew Gaze. I did this one for New Idea while Drewy was on Dancing with the Stars a couple of years ago. I'd like to think this is the number one website where you can find all the information you need on Atlanta rappers, Australian basketballers and Dancing with the Stars. FUN FACT: I actually went to Gas Nightclub with Gaze, Luc Longley and some other members of the 2000 Sydney Olympics Australian basketball team back in 2000, and for one brief moment I wasn't the whitest or the tallest dude in the club. Ricky Grace got me that drunk that I ended up losing my tape recorder though, not sure what was said on the tape but it might be for the best that it's been vaporised.

What was your first thought when you were approached to do Dancing with the Stars?
A bit surprised actually. I didn’t really know too much about dancing as such. I thought it was a real honour to be asked, but initially I didn’t give it too much consideration because I didn’t think it would be something that I’d be very good at.

What did the wife and kids think?
Based on my initial reaction, my wife Melinda thought there wasn’t a snowflake’s chance in hell that I’d get involved – we didn’t think too much of it. My kids were real keen for me to get involved. It was something a bit different for them, they were pretty excited about it all.

Have they been helping you out? Any constructive criticism?
I think so. Deep down I’m sure they’re pretty supportive. My two eldest, Megan and Courtney, are big Carlton fans, so in actual fact they’re pretty keen on Kouta (Anthony Koutoufides) as well [laughs]. Their loyalties are somewhat divided, but I’m sure they hope their old man does alright.
I’ve known Kouta for years though, it’s been a lot of fun to have him on board, we try to have a lot of fun on the show. Also, I do a radio show with Tamsyn Lewis here in Melbourne and I’ve known her for many years, so it makes it a bit easier when you know you’ve got friends going through it at the same time.

You’re still very involved with the Melbourne Tigers, any of your ex-teammates had anything to say?
[laughs] I don’t think they had a lot of confidence in my ability to dance. We got Lanard Copeland on board to help me – some of the fellas who saw me in the early days said I was lacking a bit of rhythm and we needed to bring in an expert. Now, I think they’re a little bit surprised with how it’s gone and they’re actually quite encouraging.

Did Lanard help or hinder the cause?
I think he helped [laughs]. He made an impression, that’s for sure. He got involved and lightened the session up a bit. A slightly less technical approach, but still a very entertaining way to go about it.

Any tips from your mum or dad?
My mum was vehemently opposed to me coming on the program initially. She came around and demanded I don’t go on her favourite show, ruin her favourite show and embarrass the family. She was not all that supportive early on. But once she came to a few practice sessions and saw what was going on, she loves it now – she’s probably my biggest fan. She figures that I’m not ruining her show and that’s the main thing for her.

As an ex-athlete, have you found the dancing to be strenuous exercise?
Oh, most definitely. In different types of ways compared to basketball though – the muscle groups you’re using in your legs, the positions you have to get into, the endurance, all those types of things. I guess also, for someone like me who’s never danced a day in his life, just the sheer amount of time you have to put in to learn the routines and the fundamentals of what’s involved. It certainly is very demanding. I don’t know if my partner Linda (DeNicola) or the professionals would consider what we’re doing all that demanding, simply because it’s a few pegs below what they’re normally accustomed to, but I’m sure it’s a physical strain on everyone involved.

Have you have any dancing related injuries?
My pride and ego perhaps [laughs]. Not physically, no. You have your aches and pains though – your knees and ankles start to ache, but because of what I’ve put my body though for the last 40-odd years, that’s going to be there if I’m dancing, playing golf, walking the dog... it’s just the nature of where my body’s at.

Are there any dances coming up that you’re looking forward to learning?
As I explained to Linda, we don’t want to get ahead of ourselves. We’re treating every dance as if it’s our last, because we know we could be gone at any stage. We focus on two dances at a time. Next Tuesday we have the tango, then after that we have the Pasa Doble, so while we focus on the tango, we learn the basic steps to the Pasa Doble – is that even how you say it? I don’t even know if I’m saying it right. I honestly don’t even know what lies ahead, I haven’t looked that far down the track – confidence is not of a premium.

You should be fairly confident – you’re one of the favourites.
That is fool’s gold. I think when you see the way some of the other contestants dance… I’d love to go all the way and I’m doing my very best to do that, but I think the reality of skill eventually kicks in, and I know my dancing is fairly limited.

Who do you think are the favourites?
I think Chris Hemsworth is, he moves great. He hasn’t scored too well on his first two dances, but I’ve seen him backstage and his body movement is fantastic. He’s been a bit strapped for time with his preparation, but you can tell he’s got some unbelievable body movement, and that combined with his popularity – he’s a heart-throb to millions – is a pretty good combination. Also, Arianne has been fantastic. Watching her dance, if you didn’t know Camelo, her partner, was the professional dancer, you’d struggle to know which one was the pro and which one was the celebrity. And probably the one who sticks out the most in terms of making a lot of improvement and is dancing really well, is Tamsyn.
I think you can throw a blanket over the rest of us. We all have our good days and our bad days. We try and keep up with the rest, but I think those three stick out.

If you do happen to win, where would it rank on your career achievements?
It would be an extraordinary achievement [laughs]. I couldn’t even comprehend it. It’s so unbelievable that I’m even dancing. I say to people that I’ve never danced a day in my life, and they’ll say: “Oh, you’ve been on the disco dancefloor” – but in all honesty, I haven’t even done too much of that at all. Not looking that far ahead though, my most immediate goal was not to be the first eliminated, so we got through that and it’s all a bonus from here.

Does the wardrobe department have trouble finding outfits and shoes for you?
[laughs] We have had a fair bit of trouble – they had to get in a shoe maker to specially make my shoes. With the shirts and the pants, we can’t just go off the rack. The wardrobe has been amazing in terms of designing the requests made by each couple. Linda does all my requests, I have no idea what I’m wearing – I just try to keep it pretty conservative. I’m certainly not going to be getting my gear off around Chris and Kouta!

During your basketball career you were known for having a good relationship with the refs, do you have the same good relationship with the DWTS judges?
I think so, I have no complaints. Scores have been good, there’s been some constructive criticism in there – they’ve been good to me. Overall, I think everyone’s pretty happy. Most of us are new to it all, so we take it as good advice and try to follow the instructions they give. It can be a bit discouraging, but for me it’s been great, I’m just trying to take on board what they say.


And this is what the finished product looked like in New Idea...

some of those questions are funny as hell. and how did u get that hookup wit the 2000 olympic team thats tight!