THE COOLEST DAD IN THE WORLD - YANNICK NOAH 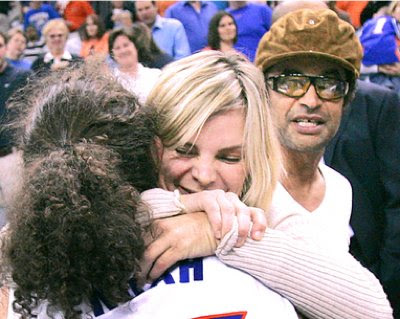 That's Yannick on the right, with his white (of course) wife and son Joakim Noah
This is the coolest dad thing ever. After his son, Chicago Bulls rookie forward Joakim Noah, was arrested for drinking in public and having marijuana in his pocket, he had this to say about all the media fuss...

PARIS - Yannick Noah is perplexed by "all that fuss" surrounding the arrest of his basketball player son, who was charged with marijuana possession and having an open container of alcohol.

Chicago Bulls forward Joakim Noah was arrested Sunday in Gainesville, Fla., after an officer spotted him on a sidewalk holding a plastic cup. Police said that during a search at the station officers found marijuana in his pocket.

"I don't understand all that fuss for just drinking a beer on the street," Yannick Noah said Tuesday at the French Open.

The elder Noah won the title at Roland Garros in 1983. He created a sensation a few years before when he told a magazine writer he smoked marijuana.

Joakim Noah was released after signing a notice to appear before a judge - standard procedure for such offenses. He could face up to six months in jail and a $500 fine for the marijuana charge.

"I talk to him every day on the phone," said Yannick Noah, who was at Roland Garros on Tuesday for the dedication of a walkway named after him. "He'll soon come over to France to see me."

Joakim Noah led Florida to consecutive NCAA titles before being picked ninth by the Bulls in the NBA draft last year.