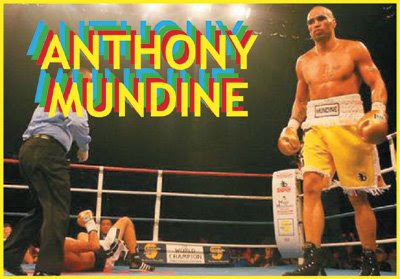 Did this interview with Anthony Mundine quite a few years ago for Urban Hitz magazine, for an article about hip-hop and sport. (Which reminds me, I also interviewed Darryl McDonald for the same article, need to get that interview online soon.) Mundine was cool to talk to, and it turned out he's a Geto Boys fan so he's alright with me!

When did you first get into hip-hop?
A real long time ago, for as long as I can remember I’ve been into it... probably since I was four or five.

Who were some of the first artists you were into?
Back then it would have been Run-DMC, Geto Boys, those kind of groups. I also liked a lot of older stuff, more old school funk and soul music.

I’m glad you said the Geto Boys, a lot of people didn’t really get into them early. You use hip-hop as your intro music before a fight, what is the ultimate adrenalin pumping, hype track for you?
There’s a few. Victory by Biggie and Puffy, Hypnotize by Biggie... I love 2Pac’s Changes too.

What do you listen to when you want to chill out? You mentioned before that you were into old soul...
Yeah, I get into the slow jams. I also listen to some country as well, my Mum was brought up in the country and my Dad’s from the bush so I was brought up on a lot of country music.

I’ve got a theory that although hip-hop was born in the 1970s in New York, that Muhammad Ali was actually the first “MC” – if you take his pre-fight speeches and put a beat behind them, you’ve got a typical braggadocio hip-hop track. Do you agree?
True, true. Ali was a great motivator for a lot of people, and he also put fear into a lot of people as well. And he put that fear into his opponents before he even stepped into the ring, his words held a lot of weight, a lot of power.

What about your own MC career? I know you’re not too shy to jump on the mic every now and then.
I’m currently working on an album, yeah. It’s going to be a good foundation for the future, we’re going to release a track with MDP, Modern Day Poets from Brisbane. Joel Turner, the beatbox guy from Australian Idol, he’s on there as well.

What about Roy Jones Jr?
Yeah, I’ve heard his stuff, it’s real good. There’s a lot of talent over there [in the US], his music isn’t as huge as Nelly or someone like that, but it’s still good. He’s got a great label set up.

Is that BodyHead Records?
Yeah.

Are you going to be working with any Aboriginal hip-hop artists in the future?
That’s what I want to do, yeah. But not just Indigenous [people], I want to work with anyone with the drive and talent to make it.

Do you feel that as a role model to young Aboriginal kids it’s important for them to understand that they can listen to the violent tales in hip-hop but not to take the wrong message from it?
Yeah, for sure. I mean, I’m an Indigenous person and I’m not a gangsta, I’m not into that lifestyle even though I can relate to that kind of music. I want to let kids know that it’s the government and the infrastructure [that’s holding us back], they want us to feel like we’re inferior, we’re no good and below everyone else. It’s about choosing the right path and not letting anyone hold you back.

There seems to be a new beef in hip-hop popping up every second week. Do you think for a change these guys should put down the mics, put on some gloves and get in the ring?
Yeah, go at it mano-a-mano. They should – but I doubt if they would.

Any MCs who you think would make good boxers?
LL Cool J, he looks like he’s got the right kind of physique to make a good boxer.

You mentioned you’re a Geto Boys fan before, what about Willie D, he was a semi-pro boxer for a while wasn’t he?
Yeah, a lot of these artists have talent in other areas. Really, it’s all about just putting your mind to what you want to do, setting goals and then doing it.
Posted by DJ LEON SMITH