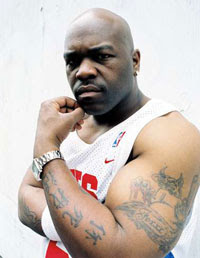 Check this out, Freddie Foxx a.k.a. Bumpy Knuckles has gone out and recorded his own version of 50 Cent's How to Rob - which is my favourite 50 track of all time. Quick history lesson about this track - in the late 1990s 50 Cent was having trouble creating a buzz for himself in the music industry, so he released How to Rob, where he describes how he would rob successful rappers. This then created beefs with guys like Jay-Z and the Wu-Tang Clan, which in turn made more people aware of 50. Then he got shot nine times, was dropped from his record label, Eminem heard one of his street mixtapes, reached out to sign him and the rest is history. Anyway, Freddie Foxx has re-done How to Rob and he takes aim at most of the successful artists of today's era. FUN FACT: Foxx once had beef with a Sydney DJ. And I'm not telling you who it was.

HOW TO ROB - FREDDIE FOXX