PUSH IT TO THE LIMIT 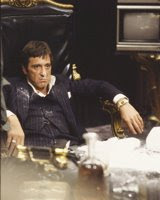 This could be the most motivational track of all time. It doesn't matter what you're doing, if you're listening to this at the same time you'll do it 100 times faster. I know Katt Williams said the same thing about Rick Ross' Hustlin', but that track doesn't hold a candle to Push it to the Limit (coincidentally sampled by Rick Ross for Push It) by Paul Engemann - you've probably heard it during the montage scene in Scarface.