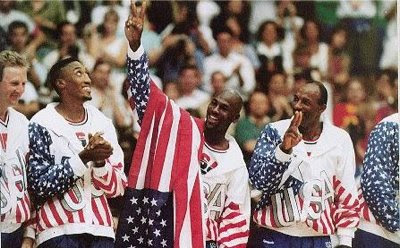 This 2008 US Olympic hoops team should never, ever, ever be mentioned in the same breath as the 1992 Dream Team. Last night against Australia they showed that they're weak. Very weak. Neil Turner weak. And if the NBA Finals didn't close the door on the Kobe/Jordan comparisons, this should slam the door closed (and weld it shut - and yes it was only one game, but Kobe has had too many of these, while MJ had exactly none). While I was watching the game I was also in a US-based hoops chatroom to see what the Yanks were saying, and all the excuses about why Australia were keeping the game close were quite amusing - "it's only an exhibition", "we're not even trying", "it's hard to play your best against lesser teams". This is the reason why the US gets spanked internationally now! And conversely, it's also the reason why the 1992 team was so pimp - even against teams like Angola every player gave 100 per cent and wanted to make sure they won and won well. This 2008 team wants to coast through the game, jacking hideous shots, going one-on-five, then magically trying to turn it on when they have to. (Maybe they were saving their energy for after the game.)

P.S. Team USA - you got dunked on by Chris Anstey. Hang your heads in shame.

P.P.S. Kobe Bryant apparently has a new nickname, "the Doberman". Forgetting that ex-Chicago Bulls assistant coach Johnny Bach gave that nickname to Michael Jordan and Scottie Pippen back in the early 1990s, that now makes it TWO nicknames (Doberman and Mamba) that Kobe has GIVEN HIMSELF. Giving yourself a nickname is a major sign of being a douchebag. Kobe's done it twice. You do the math.
Posted by DJ LEON SMITH

Email ThisBlogThis!Share to TwitterShare to FacebookShare to Pinterest
Labels: Hoops