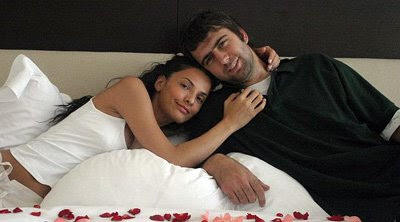 Okur is both a lover...
My technology problems have finally come to an end (touch wood) with the return of my now-repaired Xbox 360. Even though they deleted half of my game saves on the HD, I'm not that mad (is playing through GTAIV and Call of Duty 4 again such a bad thing, really?).

The best thing is now that I've got my super-fast and super-reliable internet up and running, I'm all over Xbox Live. The last time I used it my internet wasn't that great, so all I ever played was the occasionally laggy game of Gears of War or PGR3. Right now I'm getting my NBA 2K9 on, and in the first game I played it was the Orlando Magic (them) against the Utah Jazz (me).

Why did I choose the Jazz? Well they're not a cheap team to use (I'm looking at you Lakers, Cavs and Celtics - although I will be using the Celtics at some stage!) and they've got great outside shooters, which is a must when you're playing a human opponent. Everyone tries to stop dunks and get steals on defence, and being a great outside shooter is such an advantage then.

Anyway, my first 2K9 game on Xbox Live was cool. Guy I played against actually played a proper game of (online videogame) hoops, no cheap stuff. It was a close game from start to finish, ending with me coming back from four points down in the last two minutes thanks to some clutch Mehmet Okur shooting. Was very Jazz-like - Okur sets a high screen for Deron Williams, Dwight Howard backs off a bit to stop the potential drive, Okur pops out behind the three-point line and splish splash.

Final 30 seconds of the game was great as well. Jazz up by three, Orlando get a quick two with around 15 seconds left, then get a miracle steal (Jerry Sloan would have got a tech foul on the no-call in real life) and take it in for a dunk, three seconds left, timeout Jazz with the Magic up one. Guy totally overplays Deron to stop him getting the ball, backdoor cut, easy layup goaltended by Howard, Hedo Turkeyglue misses the potential game-winner.

As you can tell, yes I'm excited to finally be able to visit the wonderful world of Xbox Live. My gamertag is Mr Leon Smith so look me up on there!

And big shoutout to Mehmet Okur for his big balls! 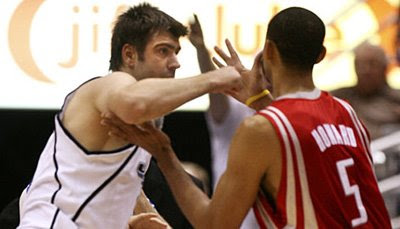 ...and a fighter.
Posted by DJ LEON SMITH