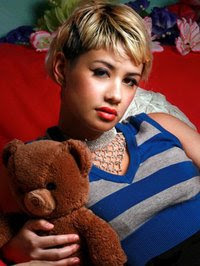 Saddle up indeed. Not quite sure how to begin this post, and it's over two years in the making. It starts at a JB Hi-Fi. Was browsing the hip-hop CDs and vinyls with B-Side, who was at the time Mr. Hip-Hop at Universal Music Australia, and in between moving all the XXX Hip-Hop 2 CDs to the front of the display racks, he stumbled across an album in the new releases section that he'd never seen before. After reading the black and pink sticker on the case, he insisted I buy this mysterious CD titled Lovers and Crypts, then and there, without listening to one track. Here's the blurb that grabbed our attention (take note, marketing/publicity people):

"Lovers and Crypts is the birthchild of North Brooklyn's Bunny Rabbit and partner in life and crime Black Cracker.

A dreamy mash up of crunk, punk and smut that belongs in the clubs you only dream about."

Considering I work in clubs you only dream about, this really grabbed my attention. But then it gets even better! Even better than a female rapper named Bunny Rabbit and her producer boyfriend named BLACK CRACKER? Yes. There's also some pull quotes from reviews of B.Rabbit (the real B.Rabbit).

"this is an X rated crunked-up workout" DAZED AND CONFUSED

The only disappointing thing about the album was... listening to it. Now, it's not that it was terrible, it's just that my hopes were so high after seeing the cover art and reading the blurbs and song titles (such as Bunny Baby, Pussy Queen and Dirty Dirt), I had pictured in my head a cross between Luther Campbell, Trina, Kool Keith, Too $hort, Bushwick Bill and Missy Higgins.

I've actually been looking out for other releases from Bunny Rabbit and Black Cracker with no luck. Here's a taste for you though, Saddle Up, the first track from Lovers and Crypts.