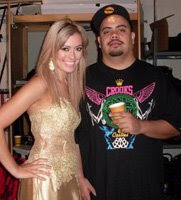 OK, it's not the sequel to Who Betta Than This? (my favourite NZ hip-hop track of all-time). Actually, that track had a remix so if there was another WBTT it'd be the third installment. Whatever. This is the new track by PNC, What's Up, produced by NZ uber-producer Pedro Dinero a.k.a. Petey Peso a.k.a. P-Money. Keep up to date with what the bros in Kiwiland are doing by checking out their blogs here and here. Particular thanks to P-Money for putting me onto Dizzee Rascal's new track Bonkers super-super early and making me look like a dance music superstar when I dropped it at the Bing last week!