WE RUN THE BURBS 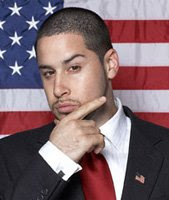 Yesterday I complained that there wasn't any good music coming out lately (when I started this blog there was almost a track every second day that was blog-worthy), and now there are two in two days! Woohah. This track is by the self-proclaimed "King of da Burbz" John Brown - the runner-up of MC Serch's White Rapper Show, it's called We Run the Burbs, a re-working of Ya Boy's We Run LA. I think I just won the award for "most dash and comma prompted pauses" in that last sentence.

[LATE EDIT: As soon as I posted this JB hit me up to say thanks - that's good customer service son. And if you're a hip-hop concert promoter down here in Aussieland, look at getting him out here for some shows.]