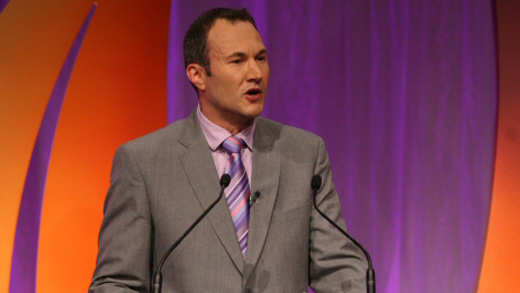 Three years ago on January 5 Clinton Grybas passed away, and it was one of the most shocking moments of my life that didn't involve a family member. I remember reading various news sites over my morning coffee (well, my "morning" coffee would be around 1pm) and seeing a headline like "TV star Grybas dies" and thinking to myself "oh there must be another Grybas on TV, couldn't be Clinton". Unfortunately, it was. Clinton was only 32, most basketball fans knew him from his work on the ABC and at the time of his death he was a rising star on Fox Sports as one of the main faces of their AFL coverage.

When I worked at Pro Basketball Today, if I ever needed any help in terms of game footage from NBL games, Clinton would always hook me up with game tapes from the ABC/NBL library (usually accompanied by a massive phone conversation about the world of hoops - he was one of the few basketball TV journalists who actually had a passion for the sport). Apart from that he was one of the nicest blokes you'd ever want to meet and catching up with him at NBL games was always fun times - like I said before, his passion for basketball was almost unmatched, hopefully he enjoyed our marathon basketball chats as much as I did. Still can't believe he isn't around. R.I.P. mate.
Posted by DJ LEON SMITH