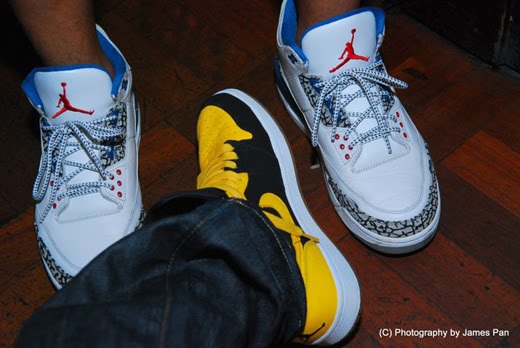 (This pic isn't from last Saturday at Ante Up, it's from their previous party. If I knew it was a Jordan/Nike showcase I would have busted out a fresh pair!)

Easily one of my most fun gigs ever. EASILY. Unfortunately at the moment, most R&B/hiphop clubs are run with one musical policy - "keep it commercial". Ante Up is the complete antithesis of that - playing commercial tracks would get you bottled there. Well maybe not bottled, but you'd definately cop a nasty glare from across the dancefloor. Actually, you'd probably get bottled.

Before the gig, I'm not even going to bullshit you, I was nervous - new club, new crowd, I was coming in as an outsider. But after the reaction I got to the first couple of tracks I played, everything couldn't have been sweeter. I wanted to stay away from the cliched hiphop bangers, plus whenever I do a gig I always go in with the mindset that the promoters booked me to do me, not an imitation of other DJs on the bill. In this case I stuck to some classic hiphop, some newer stuff - which I felt especially safe playing after seeing the crazy response the DJ before me (Kase) got when he played this, a quick Outkast and Jay-Z megamix and even some local stuff.

Being the numbnuts that I am, I left the cables for my mp3 recorder at the Bing the night before so I didn't get to record my set (remember to jump on my Facebook page for weekly mixes live from the Bing). Here's the tracklisting though, just aurally imagine each track with super-smooth transitions, yeah buddy!