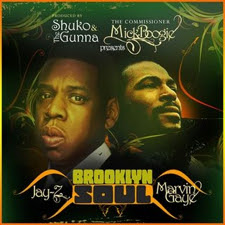 Got a few mashups coming your way now. First one isn't technically a mashup, but it's close enough. Taken from the Brooklyn Soul mixtape hosted by Mick Boogie, this is the Hello Brooklyn remix featuring Lil Wayne. The remix is produced by a couple of guys named Shuko and The Gunna. It's basically the Hello Brooklyn track on the Marvin Gaye Sexual Healing beat, damn it sounds good though. The next track (I'll post it shortly) is another Jay-Z mash - technically it's a mashup of a mashup. My head hurts just thinking of that.