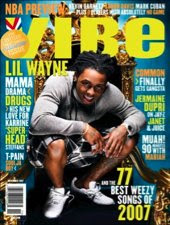 OK, this is going to shut the clubs down. Yes, it's not a street track ("heads" are already complaining about this) but really, who cares? A billion white girls are going to buy Weezy's album for this track alone. Lollipop by Lil Wayne feat. Static Major. I might even start my set out with it this Saturday night son! As a bonus I've included another Lollipop track - Lollipop by Pitbull, Don Dinero and Uncle Luke.