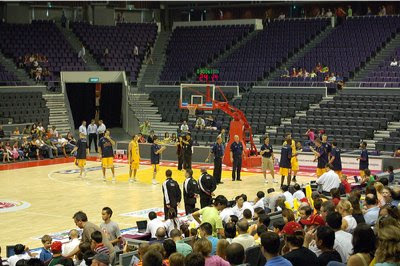 We get more people at XO every Saturday night!

Just finished watching the NBL Finals, where the Melbourne Tigers (who are, with the exception of D-Mac and Dave Thomas, the most unlikeable champs of all-time IMHO) defeated the Sydney Kings. And it was in front of a sellout crowd at the Sydney Entertainment Centre, which means since the turn of the century the Kings have had three sellout crowds - twice for the deciding game of an NBL Finals series, and once for the first time the Kings hosted a Finals game.

What does this mean? That Sydney crowds only support a winner, or that the NBL has no idea what they're doing? Considering the fact that the Kings got crowds five times their current size when they sucked, I'd say it's the latter. The history of the NBL is an almost textbook case of how to ruin a sporting league.

Basketball in Australia started to pick up some momentum in the mid-1980s, and by the late '80s hoops stadiums around the country would be regularly sold out for NBL games. Then in the early '90s the popularity of the NBL went through the roof and guys like Dwayne McClain had their own McDonalds and Reebok commercials.

So how did the NBL capitalise on their success? They did... nothing. What did all the football codes do, seeing this upstart league cutting into their share of the market? They worked their nuts off to crush the NBL, recruiting stars like Tina Turner (right) to spice things up. And what did the NBL do to counter this? Again, nothing. By the time the NBL woke up, it was 2000, they didn't have a TV deal and I could fit the amount of people at an average Kings game into my two bedroom apartment. In 2008 I could fit the average crowd from a West Sydney Razorbacks game into a bus shelter.

The NBL's marketing plans have been terrible. One year their slogan was "It's All Fun". What the hell is that? This might have been be the worst slogan in the history of slogans. The thing about Australia is that our most popular sports are all very physical, and the misconception of basketball is that it's a soft sport. Why not put together a highlight packages of guys getting fouled going to the basket, guys dunking on each other, those push-and-shove mini-fights that break out every game? No, a better idea would be to get a bunch of players singing along to High School Musical songs. So very, very lame.

One thing in the NBL's defence is the amount of marketable players in the league has gone down exponentially since the days of D-Train's Mickey Dees ads. Andrew Gaze, who retired a few years ago, is goofy and fun in front of a camera (like when he was on Dancing with the Stars, left), and Shane Heal was the perfect villain. Now Gaze is adorably stumbling over player's names (no shots) as a Fox Sports commentator and Heal just got cut as player/coach of the South Melbourne Dragons. Right now the NBL's MVP is Chris Anstey, who is as boring as two planks of wood. Most of the imports are charismatic, but the problem with marketing around imports is that for every Lanard Copeland who stays in Australia for a decade and a half, there's a Julius Hodge who stays for half a season.

I used to be the Editor of PBT, an Australian basketball magazine focusing on the NBL and NBA. A deal I worked out with the NBL was they'd supply me with weekly player diaries, where two players a week would give me 800 words on anything they'd like, but it generally ended up being on how tough their next opponent would be, etc. In my five years as PBT Ed, three guys gave me columns that were actually interesting - Jayson Wells, James Harvey and John Rillie (who also has a cool blog, check it out here. JR also told me something very interesting in one of my first ever interviews for PBT when I asked him what the difference was between playing in the NBL and playing US college hoops for Gonzaga - he said playing for Gonzaga was like playing in a professional league that happened to be amateur, while playing in the NBL is like playing in an amateur league that happens to be professional).

[LATE EDIT: Just remembered three more players who were ridiculously helpful during my time at PBT - Andre Moore, Simon Kerle and Bruce Bolden. All three of those guys could kick my ass with little effort so I can't forget about them!]

While the NBL was helpful enough whenever I had a media-related request, they rarely came to me with ideas to help keep guys like James Smith (right) on the cover ahead of Michael Jordan (FUN FACT: a James Smith cover outsold the issue of PBT with MJ on the cover, declaring his return to the NBA with the Washington Wizards). This is while I was copping major heat from some NBA-fanatical internet soldiers as well, because when I took over the reigns of PBT I almost doubled the amount of NBL content (at the expense of NBA coverage, obviously) and let the NBL know that whatever they had for me, I'd find a spot for it in the magazine.

Having said that, with all of the obstacles (which I've probably even overstated here) the NBL has had to face, part of a marketing team is to find angles to market. Yes, it might be difficult at times, but that's your damn job. I see that Mike Wrublewski is looking to buy the Kings again, and for all his flaws - like trying to cut off my media access to the team the year after I wrote a controversial article on the Kings for Inside Sport - he's passionate about hoops and I'd love to see him back involved with the NBL. He's a marketing wiz who knows how to keep the Kings in the public eye. It's just a shame that it looks like just as Mike W is coming back, Bullets owner Eddy Groves is on the way out. His deep pockets have come in very handy for the league in recent years. 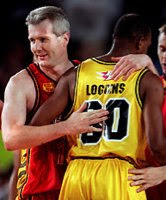 It really kills me to watch the NBL slowly fade away, as it's one of the top basketball leagues in the world. We get top-shelf imports and the Australian talent is world-class. Basketball was the reason I moved to Sydney from Brisbane (as a journalist, not a player - my playing career extended to being a spare body at Brisbane Bullets training sessions as a skinny high school kid, which got me the chance to play with and against Leroy Loggins, pictured left), and now it seems there only one solution - blow the league up and start from scratch. Follow the A-League template if you have to (focusing more on regional cities though, as the NBL is thriving in places like North Queensland), get your marketing balanced between hitting core hoops fans and casual sport fans, focus on the insane talent levels we have down here and see what happens.

It can't be any worse than what we've got right now.

Some links to give you an overview of the state of the NBL:
NBL, from sell-out to stay-away crowds, by Stephen Howell, The Age (December 13, 2003)
NBL chief concedes defeat, by Marco Monteverde, FoxSports.com.au (March 01, 2008)
Are we watching the death of basketball?, by By Tim Morrissey, The Daily Telegraph(February 28, 2008)

(NOTE: I haven't rigorously fact- or spell-checked this. It's intended to be my general overview of what's wrong with the league rather than a clinical point-by-point breakdown of everything that's gone wrong with the NBL.)
Posted by DJ LEON SMITH

Enjoyed the read, some great points about the lack of marketing when things were rolling. Absolutely we scared the crap out of NRL and AFL....and are paying for our amanteur approach. Rillie is SPOT ON with his analysis of the NBL, a VERY amateur operation at all levels from about 80% of the people involved in the league, esp the administrators, as well as the players. The fact you get paid doesn't decide you are professional IMO, rather how you act/treat the game/hard you work, etc.
Happy to hear from people (jbamore@hotmail.com)

Thoroughly enjoyed that read and your observations of a dying league. You mentioned that perhaps copying the A-League model with more regional teams is the way to go, I agree.

The Sunshine Coast is a largely un-tapped market, and has a bigger population than Cairns or Townsville. Also, Darwin is crying out for a team and the locals would definitely get behind it. These places must be looked at ahead of say a Canberra team (or even an Asian-based team), where there would be a fight for media space with other codes.

Another A-League system I would adopt is the centralized marketing structure. NBL clubs market themselves differently and most are not using the most effective methods of bringing fans through the gates.

I wrote about this topic on my blog recently:
http://aussiesportsrant.blogspot.com/2008/03/does-nbl-have-future.html

Another good article on this topic I found:
http://preneurmarketing.com/?p=174

Hopefully the NBL pays attention to what the passionate fans are saying, but history suggests they'll just passively sit back until the league fades away. Fingers and toes crossed it doesn't though.