SAVE THE SONICS PART DEUX - DAVID STERN IS AN ASSHOLE 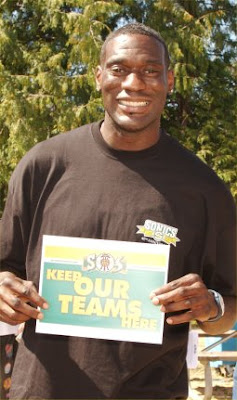 Everyone is against the Sonics moving - Sonics fans, NBA fans, NBA players, NBA coaches. Everyone except for David Stern and Clay Bennett it seems. Here's some quotes from Shaq and other members of the Phoenix Suns when they visited Seattle earlier in the week (to kick the Sonics' ass, as per usual this season).

"It's dumb, it's stupid. They should have to wait from the bottom like everyone else."
- Shaq on Oklahoma City getting the Sonics rather than waiting for an expansion team

"Seattle has tradition, the Space Needle, and there's water here. Oklahoma City's a college town. You're not going to have the TV market there."
- Shaq-Fu again

"When I think of Seattle, I think of G.P., the Reign Man, Sikma, Lenny Wilkens. The Oklahoma City Sonics? When my son asks me about that, I'll say there's no such thing."
- Shaq a.k.a. Mr Awesome

"That's a bad road trip. It's cold. This shouldn't happen. Seattle's a great market, a great city, and I would think there's a lot of money in this city. It's a shame."
- Grant Hill on having to go on an Oklahoma City road trip

"The people who get shortchanged here, of course, are the fans."
- Grant Hill again

"Hopefully it will all sort out. It's a great place to play, a great city, and traditionally, they've been great fans."
- Suns coach Mike D'Antoni

"I'm sorry for the fans. It's a great basketball city. They deserve a club here... Obviously, I'm not privy to all the reasons, but it doesn't make sense on the surface."
- Steve Nash

Below, a photo gallery of David Stern's finest moments while he's been the boss of the NBA. Some of them are slightly abstract, but I'm sure you can work out what most of them are. (And yes, some were just horrible tragedies, but they happened on David Stern's watch so he can wear it, the same way he takes credit for the Bird/Magic/Jordan NBA boom.)

IF I'VE FORGOTTEN ANYTHING, LET ME KNOW!
Posted by DJ LEON SMITH