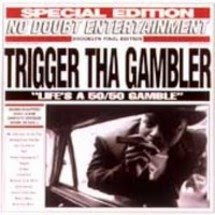 Who remembers these guys? Seeing as the internet is a world-wide medium, I'd guess maybe six people in total, and possibly two in Australia at best. If you've got The Nutty Professor soundtrack then you'd know Smoothe Da Hustler and Trigger Tha Gambler from My Crew Can't Go For That (feat. D.V. Alias Khrist). This was one of the hottest tracks in 1995, I remember hearing it on a bunch of mixtapes back when mixtapes actually came on TAPES. Yes, I'm old. Anyway, these guys never really caught on in the mainstream, and for whatever reason Trigger's Life's a 50/50 Gamble was never released by Def Jam. Below you can check out My Crew..., Trigger's street hit Broken Language and the 2008 remake by Method Man and Redman, creatively named Broken Language 2008.