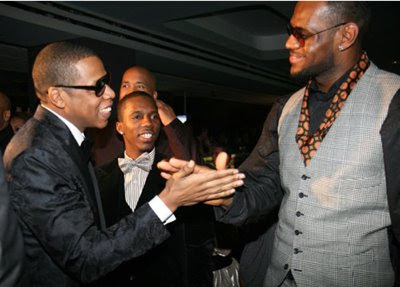 Unless you've been living under a rock, you already know about the LeBron James/DeShawn Stevenson beef (quick recap - Stevenson calls LeBron "overrated", LeBron gets mad, calls himself Jay-Z and calls Stevenson Soulja Boy, Stevenson gets Soulja Boy to sit courtside at a Cavs-Wizards playoff game, Wizards try to knock LeBron's head off, LeBron leads Cavs to many victories over the Wizards). In DeShawn's defence, he's not the sharpest pencil in the box - anyone want to charge a few purchases to his American Express Black Card?

Well now Jay-Z has officially entered this NBA/hip-hop beef, recording a track taking aim at DeShawn and sticking up for his buddy LeBron. This is history kids, as it's the first time where the owner of a rival team (Jay-Z is a part-owner of the New Jersey/Brooklyn Nets) has dissed a player on another team for dissing a guy who isn't even on his squad. To be honest, it's the first time an NBA owner has ever dissed a player on a hip-hop track. Listen to it below, it's over the Too $hort Blow the Whistle beat. Hopefully this will start a trend in the NBL, perhaps with D-Mac's kids firing some venomous verbal darts at Andrew Vlahov.