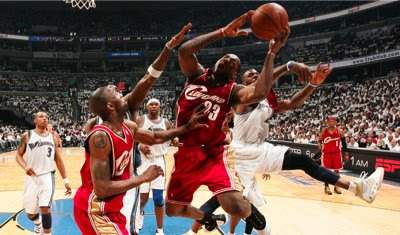 That was quick. Less than a day after Hov's track hit the streets, a Washington MC, Pro'Verb, has answered Jay-Z's diss to DeShawn Stevenson and the Washington Wizards - and it's not bad at all!

How good has this playoff series been? Considering the Cavs will probably win it 4-1, DeShawn Stevenson's antics really have done wonders to inject some feeling into what could have been a forgettable first round series. And it's good to see some big hits coming back into the NBA, in fact we're seeing some of the hardest fouls on a superstar since the Bad Boys era. (That's Michael Jordan hidden underneath the legs and arms of Dennis Rodman and Isiah Thomas.)