FIND ME A NEW HOOPS TEAM 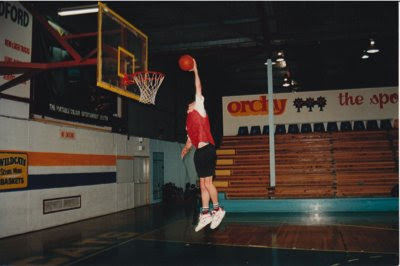 Check out my hops! If a NBL team is looking for a 12th man, minimum wage guy who can also DJ during pre-game/half-time, let me know. (P.S. The picture above was taken 12 years and 40kg ago.)
The three professional basketball teams closest to me all disappeared from the sporting landscape during the NBA/NBL offseason. Two of them - the Brisbane Bullets and Seattle Sonics - were closest to me in terms of I’ve always supported them, and the Sydney Kings were literally closest to me, as in their home stadium is (well was) right around the corner from my apartment and you could find me at most of their home games.

So now I’m a hoops orphan in need of a loving foster home, NBL and NBA. There are a few teams I’ve already ruled out, a few teams I’ve always had a soft spot for, and my reasons are explained below. Help me choose a team! Let’s start with the NBL, and the teams team I could never support...

NBL - NEVER
Adelaide 36ers
Why: Their fans (and various members of their media brigade) are certified nutcases. And one of those two groups of people helped get PBT (at the time the only basketball magazine in Australia) canned. I’m a big fan of Brett Maher though.

Townsville Crocodiles
Why: Queenslander! Plus I’m a fan of their current shooting guard (John Rillie) and their former shooting guard (Simon Kerle). And Homicide Williams is a cool guy to hang with in the club.

Gold Coast Blaze
Why: Queenslander! And the coach of the Blaze (Brendan Joyce) was my high school coach.

Wollongong Hawks
Why: I used to enjoy my road trips to Wollongong to watch the Hawks play. Apart from the near-fatal car accident one time, I generally have fond memories of Wollongong. Been a Kavossy Franklin fan since his time with the Kings as well.

Now if you’re reading this and you’re connected to a NBL team, I’m looking for the following players/coaches/management to give me their sales pitch as to why I should jump on their team’s bandwagon. Conversely, if you’d like to pitch why I shouldn’t support your team due to the fact that teams I follow end up vanishing into thin air (or Oklahoma), that’s OK too. I’m expecting a representative of the Townsville Crocodiles to be the first to reply! I’ll update whenever I get a response.

NBA - NEVER
Oklahoma Thunder
Why: I’m a Sonics fan. Plus they have the lamest logo, jerseys and owner in the history of sport. I’m going to miss Saer Sene though.

Houston Rockets
Why: Tracy McGrady - the most overrated player in the history of the NBA. He took this title from Vince Carter, only because he isn’t even rated anymore.

NBA - SOFT SPOT
Boston Celtics
Why: My Irish heritage lends itself to supporting the Celtics, plus I’ve always been a fan of Kevin Garnett. The fact that Ray Allen (ex-Sonic) is there doesn’t hurt either. However, I think it’s really bad karma to start supporting a team the year they win the title.

Toronto Raptors
Why: Nathan Jawai. That’s about it.

Utah Jazz
Why: They always do a great job of knocking the Rockets out of the playoffs, plus it’s only a matter of time before Deron Williams dunks on Kobe. They lose cool points for having Carlos “stabbed a blind man in the back” Boozer on the roster though.

New York Knicks
Why: For some reason I always loved using the Knicks in the old NBA Live games, even though I was never a true fan of the team. Another plus is their logo is cool and a selection of my all-time favourite players have been Knicks at some stage - Patrick Ewing, Larry Johnson, Xavier McDaniel, Charles Oakley. And the fact that they stink right now means it’s a perfect time to jump on the bandwagon, so I can use the “oh, I’ve been a Knick fan since the Starbury/Jerome James era” when they finally get good.
Posted by DJ LEON SMITH

The Crocs should become your team. Why?

- The Crocs have alot of other fans that will share your passion.

- You like to drink, so do North Queenslanders. You will have many friends at the bar.

- Last but not least a current Croc and former Croc have made it easy for you to fill column space.