MY ADVENTURES WITH KANYE WEST AND JAY-Z 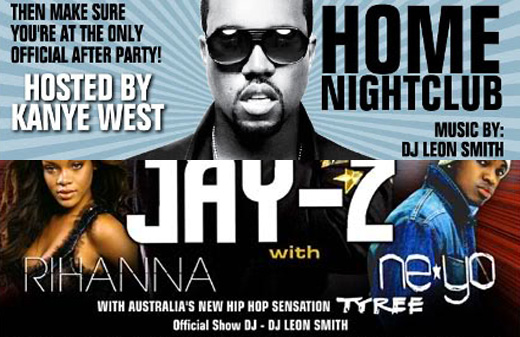 BREAKING NEWS: Kanye West and Jay-Z just released a new album! While I'm not going to break down "Watch the Throne" here (I already did that on Twitter, using an awesome NBA analogy), instead I'll enthrall you with a couple of cool stories/riviting tales about my run-ins with the Throne blokes.


KANYE WEST: When Kanye first toured Australia, he wasn't quite KANYE WEST!!!!!!!! yet, if you know what I mean. He was that guy in the bear suit who used Chipmunk samples on every track he produced. Still, I was a massive fan (don't click on that link until you've read this post, unless you love reading the same story twice).

So when I found out Kanye was touring, I was psyched. When I found out I'd be DJing his afterparty, I was psyched-psyched. So before the afterparty I checked in with the promoter to see if there was anything I should or shouldn't play (not that Kanye had public beef with anyone at the time, but still wanted to check). Got told nope, just rock it. Cool!

Night is going well, then a couple of minutes before I'm due to start my set I get a message from upstairs (not God, I mean upstairs in the VIP area) that Kanye only wants to hear his own tracks. Now I'm not sure if this is from the man himself or an overzealous handler/groupie (FUN FACT: a lot of the demands that come from artists in club environments come from their weed carriers and have nothing to do with the artist's wishes), but realise that as a solo artist Kanye only has two albums out at this time. And this is pre-Serato, so I've got two crates of records to work with.

A couple of songs into my set, Kanye jumps on the mic and starts talking shit, gets me to stop the music, talks some more shit, I drop "Through the Wire" and everyone loves his and my balls. I didn't play all Kanye tracks for my two hour set, but I played most of his club-playable shiz and a heap of Kanye-produced stuff. Oh, you can click on that "massive fan" link now.

JAY-Z: I didn't get to meet Jay when I DJed his first ever Australian concert (it fills me with much pride and a +100000000000 ego boost whenever I type/say/think about DJing at Jay's first Aussie concert), but it was still an entertaining evening. A couple of minutes before Jay arrived at the venue, I was hanging backstage with a friend of mine who worked for Universal - I'd already finished my work for the night, playing music between each performer's changeover - we get the word that we need to vacate because Jay is about to arrive. I didn't mind getting thrown out (we were getting thrown out from backstage to right beside the stage, it's not like we were getting tossed from the venue), but it was funny to see EVERYONE get thrown out. From the lowest of groupies, the "DO YOU KNOW WHO I AM" club promoters and even the highest of higher-ups at record labels, we all got the boot so Jay could have access to every single dressing room, media room, conference room, everything on offer in the bowels of the Sydney Entertainment Centre (maybe he just wanted to look at Damian Keogh's retired Sydney Kings jersey in private, I'm not sure).

I did get to speak to Memphis Bleek though, nice chap.