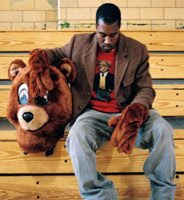 Before "George Bush doesn't care about black people", the wacky shades and collabos with Jeezy and Weezy, Kanye West was a relatively unknown producer who no one wanted to sign as a solo artist - not even the label he eventually signed with, Rocafella. His debut album, The College Dropout, is the last classic album in my eyes, it was so good I ended up buying five copies of it to give to my friends who weren't into hip-hop. It's funny now to see Kanye develop into this super-ego guy (he's always had an ego, but he's now known as one of the cockiest - and justifiably so - guys in music). I remember DJing at his afterparty at Home Nightclub a few years ago, I asked the promoter before the gig if there was any music policy or tracks I should/shouldn't play, was told to just "do your thing". Literally two minutes before I jumped on I get a message delivered to me in the DJ booth that Kanye wanted to only hear his own music - luckily I had a crate packed with just Kanye tracks and tracks he had produced (this was pre-Serato, so it wasn't like I could just search for "Kanye" on my laptop). Weirdest thing was even thought it was the official Kanye afterparty, none of his lesser-known tracks really got a response from the crowd. They got a reaction from Kanye though, so that was all good!

Check out these two tracks from The College Dropout, my personal favourite Family Business and the remix to Kanye's first single, Through the Wire. He recorded the album version of Through the Wire literally through wire - his jaw was wired shut after a serious car accident, which is something I can relate to 100 per cent - I can also relate to dropping out of college, something I ended up doing after one year of pure boredom. Hmm, maybe I'm more like Kanye West than Ben Affleck...


THROUGH THE WIRE REMIX